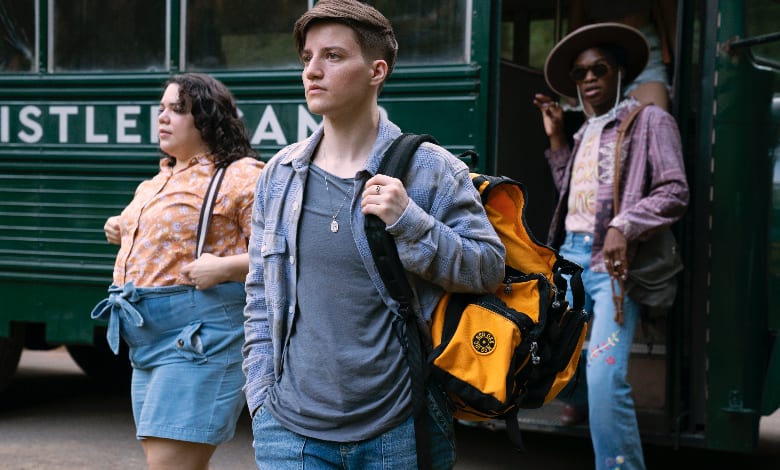 There’s an thrilling horror movie trapped beneath “They/Them,” however everybody concerned refused to let it out.

Horror stays the perfect platform to entertain whereas sending a message. It’s not a slam-dunk method, although. Too many filmmakers focus so laborious on the latter they overlook they’re making a style movie.

Think “Antebellum” and the brand new “Candyman” for Exhibits A and B.

Kevin Bacon provides it his all as Owen Whistler, the top of a homosexual conversion camp. Except Owen’s coronary heart doesn’t appear to be in it from the bounce. His opening scene welcoming the homosexual, bisexual and trans campers is like one thing out of a GLAAD pamphlet.

He speaks of affection, acceptance and secure areas. No hate, concern or anger. Sounds like he’s awful at his job, proper? If you’re an illiberal mother or father seeking to convert your homosexual youngster, the  camp’s Yelp critiques alone would preserve you away.

Then once more, nothing on this amateurish manufacturing makes a lot sense.

Maybe we’ll see Owen slowly rescind these fantastic guarantees. Instead, the slapdash story can’t choose a tone, not to mention a personality arc for poor Bacon. Did he lose a guess and discover himself caught on this Peacock authentic?

One early sequence makes an attempt to construct a way of dread. All we get are a couple of photos of ventriloquist dummies, the laziest try to strike up some environment.

Audiences might have Post-It notes on their screens to remind them it’s a horror film.

Add clunky romances, limitless dialogue that might make a Hallmark film scribe cringe and an embarrassing dearth of scares and also you’ve acquired a missed alternative on an epic scale.

“They/Them” even stops chilly mid-film for not one however two seduction scenes again to again. Can somebody remind author/director John Logan he’s making a horror movie? It appears he forgot.

Horror films typically make use of the “slow burn” approach, build up characters and eventualities to arrange us for the thrills forward. “They/Them” takes ceaselessly to even method a scare sequence, however that point is spent with bland empowerment speeches and predictable revelations.

Poor Anna Chlumsky of “Veep” fame. Her position makes so little sense it’s like she wandered on set with out a lot as a script define to information her method.

It’s laborious to select one sequence because the movie’s nadir, however the movie’s sing-a-long deserves sturdy consideration.

“THEY/THEM” is now accessible to stream on Peacock! pic.twitter.com/zI1vbGGuE0

The craziest a part of “They/Them” is the expertise behind the scenes. Logan penned “Skyfall,” arguably the perfect Bond movie in a decade. He’s additionally the screenwriter behind the cruelly underrated “Rango” and “The Last Samurai” with three Oscar nominations to his credit score.

So why does his screenplay learn like an LGBTQ chat room discussion board?

Logan is the furthest factor from a Hollywood hack, however you possibly can’t inform it from his directorial debut. He reveals zero instincts as a horror auteur. It’s as if the style in query by no means crossed his thoughts.

His characters could also be refreshingly distinct for a horror movie, however they lack an internal life. Their sexuality defines them, and the movie doesn’t permit sufficient quiet moments to make them relatable, not to mention entertaining.

Their collective ache is palpable, and the younger forged does an admirable job of displaying their alienation. It’s the perfect a part of the film, but it surely’s dwarfed by the movie’s flaws.

There’s a thriller behind the slasher stalking the camp, however the movie can’t even conceal the reveal lengthy sufficient to make it rely.

We’re left with a thriller that deserves its rightful place within the yr’s “Worst Of” checklist.

HiT or Miss: “They/Them” is woke to its core, however that isn’t its deadly flaw. It’s cartoonish, scare-free and so intent on empowerment it skimps on each horror film important.