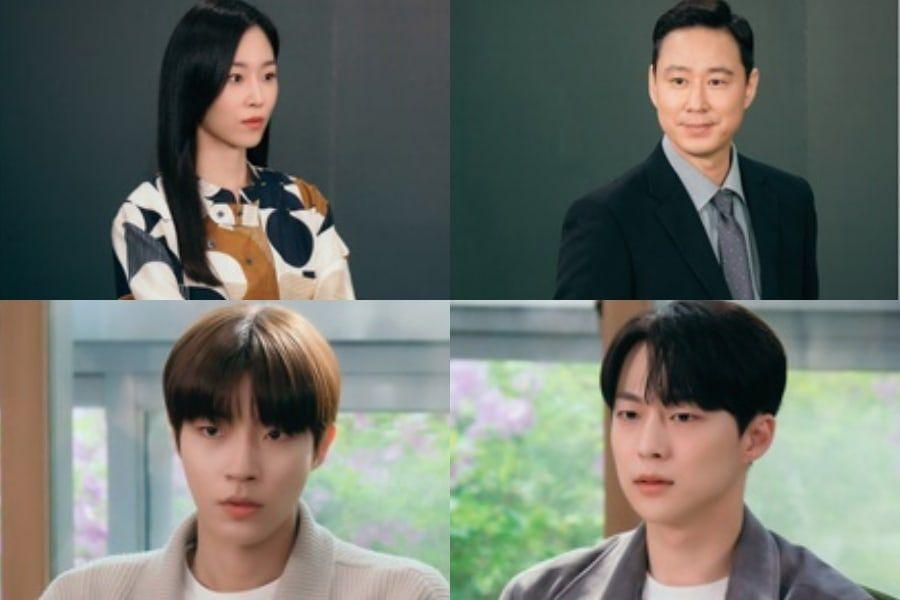 SBS’s “Why Her?” shared new previews of the upcoming episode!

“Why Her?” is a thriller romance drama starring Seo Hyun Jin as Oh Soo Jae, a cold-hearted lawyer who has grown empty after solely chasing success, and Hwang In Yeop as regulation pupil Gong Chan who would do something to guard her.

Oh Soo Jae lastly discovered about Gong Chan’s true identification after seeing his previous file of being wrongfully accused of the homicide of his stepsister Jeon Na Jung (Hwang Ji Ah). Oh Soo Jae couldn’t cover her shock to seek out out that Gong Chan is identical individual as Kim Dong Gu (Yu Gene Woo), the individual she defended up to now as a lawyer. She began to push him away, and regardless of his belated apology, she refused to forgive him, saying, “You deceived me.” However, the actual cause she determined to maintain her distance from him is as a result of she had given up on his case though she knew he was harmless. Oh Soo Jae shed tears of remorse and regret, saying, “I abandoned Kim Dong Gu. I abandoned you.”

Newly launched stills present Seo Joo Myung (Kim Young Pil) displaying up throughout Oh Soo Jae’s lecture. He’s carrying a relaxed, impertinent smile on his face, and he or she stares at him as if he’s an unwelcome visitor. Oh Soo Jae retains her distance from him along with her arms folded in entrance of her chest, clearly displaying her distaste that he dropped by with out discover. This scene reminds viewers about Kim Dong Gu’s case from ten years in the past when Oh Soo Jae was the lawyer and Seo Joo Myung was the prosecutor.

The manufacturing group shared that the hidden fact of Jeon Na Jung’s case from ten years in the past will present unimaginable shock and twists. They added, “Please watch to see how the relationship of Oh Soo Jae and Gong Chan, who are severely tangled through this case, will flow.”

Catch up with the drama under: