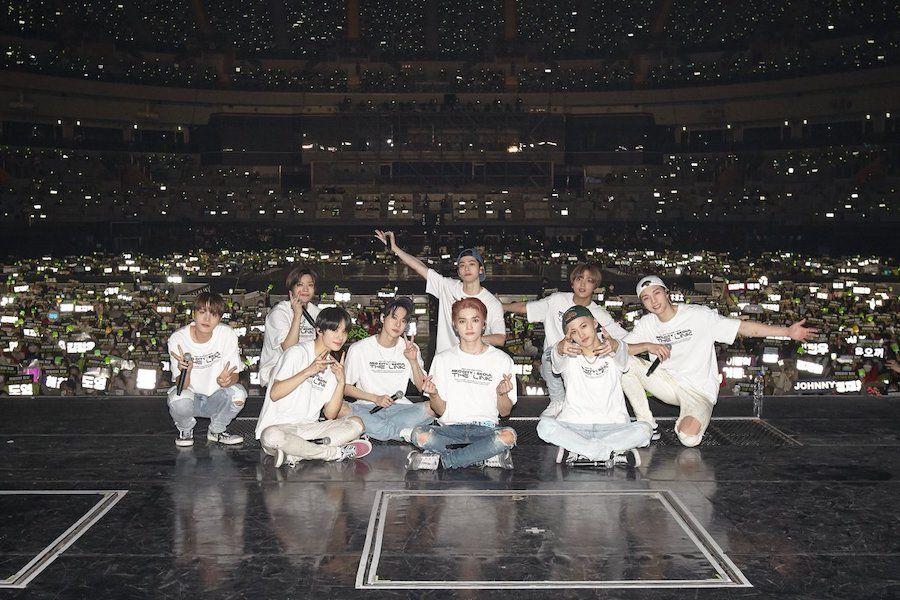 From December 17 to 19, NCT 127 held their second solo live performance on the Gocheok Sky Dome in Seoul, titled “Neo City: Seoul – The Link.”

In accordance with COVID-19 protocols, all of the viewers members and employees members needed to present proof of vaccination and a detrimental PCR take a look at with the intention to enter the dome. The viewers have been seated socially distanced from one another, and social distancing protocols have been additionally noticed whereas coming into and exiting the dome. Although the dome seats 20,000 to 30,000 folks, solely 4000 folks have been allowed per night time.

Not solely was the December 19 live performance broadcast all over the world by means of Beyond LIVE, it was additionally broadcast stay at CGV film theaters all through Korea.

After making their grand entrance on the stage, NCT 127 opened the live performance with their hit music “Kick It,” the title monitor of their second studio album “Neo Zone.” The music swept a number of charts upon its release, and the album “Neo Zone” is especially significant for the group and followers because it earned NCT 127 their first “million seller” standing.

NCT 127 subsequent carried out “Lemonade,” a B-side monitor from their third studio album, “Sticker.” As the viewers couldn’t cheer as a result of COVID-19 protocols, the followers confirmed their appreciation for the opening performances with heartfelt applause.

Taking the central stage, NCT 127 carried out “Earthquake,” NCT 127’s monitor from NCT’s current third studio album “Universe,” for the primary time. In maintaining with the theme of the music, the stage appeared to tilt up and down.

Jaehyun mentioned, “We burn hotter today than yesterday, tomorrow than today. Before I came up on stage, I had a scar on my cornea so I had to take my contact lenses out, and I was worried that I wouldn’t be able to see you. But now that I’m here, it feels like my eyesight is getting better and I’m getting healed.”

Taeyong mentioned, “I’m so grateful that so many people came to see our concert. I think that it’s something to be grateful for that we can spend December, the end of the year, with all of you. Since you have all followed the guidelines so well, we worked hard to repay you. We’re going to light this final concert on fire too. Please applaud.”

Yuta mentioned, “It’s already the final night. I think it’s a miracle that we’re able to do a concert at all in these times. We’re going to pour it all out so that we can wrap up this miracle-like concert on a good note, so please enjoy it until the end.” Taeil mentioned, “It’s already the third night, the final night of the concert we had prepared. I’m excited thinking about how we’ll tear up the stage tonight. There are also a lot more fans watching live, so please look forward to it. We worked hard to make the performances even cooler.”

Jungwoo mentioned, “We were able to keep up our strength until the end because there were always people who came to watch us perform. Even though there was snow on the road today, I’m glad you were able to make it here safely. Please enjoy the final concert until the end and show your love for us nine members.” Doyoung mentioned, “Throughout the preparations for the concert, we weren’t sure if we’d be able to do it, but now that it’s the final night, it’s a new feeling. Is everyone prepared to enjoy this final night properly? We’re also going to show everything we’ve prepared.”

NCT 127 continued their performances with “Elevator (127F),” “Dreamer,” and “Love Song.” The members additionally placed on solo and unit performances like “Another World” (Taeil), “Love Sign” (Haechan and Taeil), “Run Back 2 U” and “BASS BOT” (Johnny, Yuta, Taeyong, Jaehyun). Back as a full group, they carried out “Music, Dance,” “Highway to Heaven,” and “Breakfast.”

NCT 127 carried out “Favorite (Vampire)” and “Simon Says, followed by “Love on the Floor,” “Bring the Noize,” and Yuta’s solo efficiency. The live performance wrapped up with “Paradise,” “Love Me Now,” “Touch,” “Pilot,” “Sticker,” and “Cherry Bomb,” adopted by the encore performances.