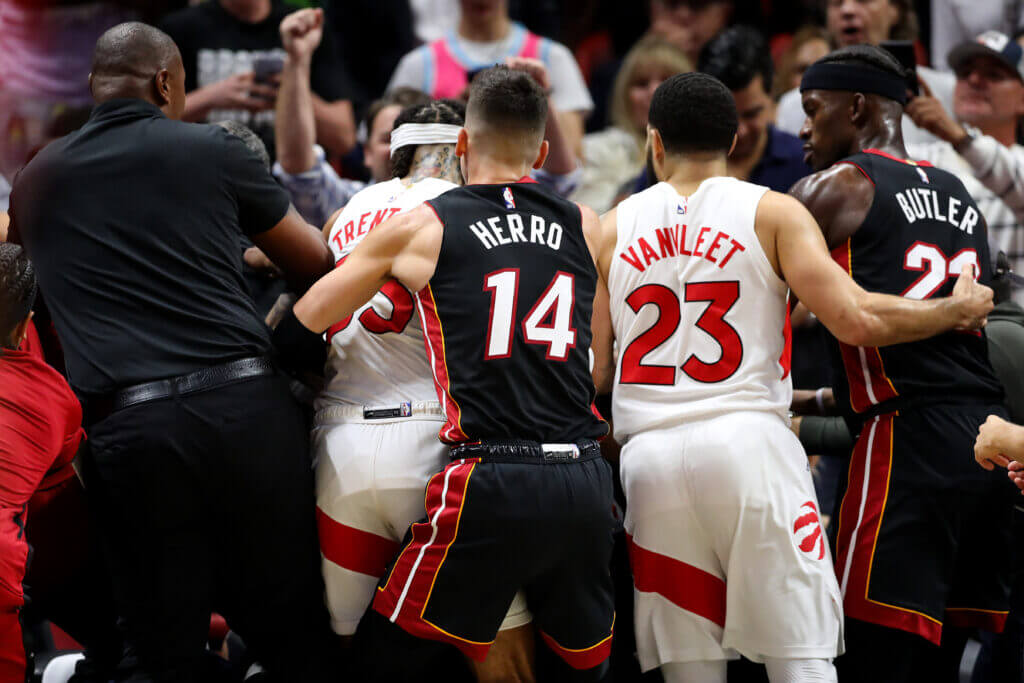 A Saturday night time combat between the Miami Heat and Toronto Raptors has resulted within the suspensions of Miami’s Caleb Martin and Nikola Jovic, whereas Toronto’s Christian Koloko was fined $15,000 for his position within the altercation.

The scuffle concerned over a dozen gamers and coaches and resulted within the ejections of Martin and Koloko. As the 2 battled for a rebound within the third quarter, Martin was making an attempt to field out Koloko when the Toronto rookie reached for the rebound and received tangled round Martin’s legs.

As Koloko fell on the baseline, Martin stood over him after which shoved him into the court-side photographers when Koloko tried to face up. Replay from the sideline cameras confirmed Martin grabbing beneath Koloko’s legs to take him down as the large man tried to get again up.

Things are getting chippy between the Heat and the Raptors…

Every participant and official on the courtroom shortly ran towards Martin and Koloko, and members of the close by Heat bench jumped in to tug gamers aside.

After officers reviewed the incident, each Martin and Koloko had been assigned technicals after which ejected.

Following the sport, Koloko informed reporters that he was confused by the ejection.

“I was confused as you. I have no idea. He just stood up looking at me like crazy. I just stood up. I don’t know,” he stated.

“He tackled me and we were on the ground and everybody came and I was looking around like, ‘What was going on? What’s going on here?’ I was just laughing.”

In a matchup final 12 months between the groups, Martin had a tough foul on Raptors then-rookie Scottie Barnes when Martin fell into after which shoved Barnes on the baseline after a quick break.

The Heat defeated the Raptors 112-109 on Saturday.