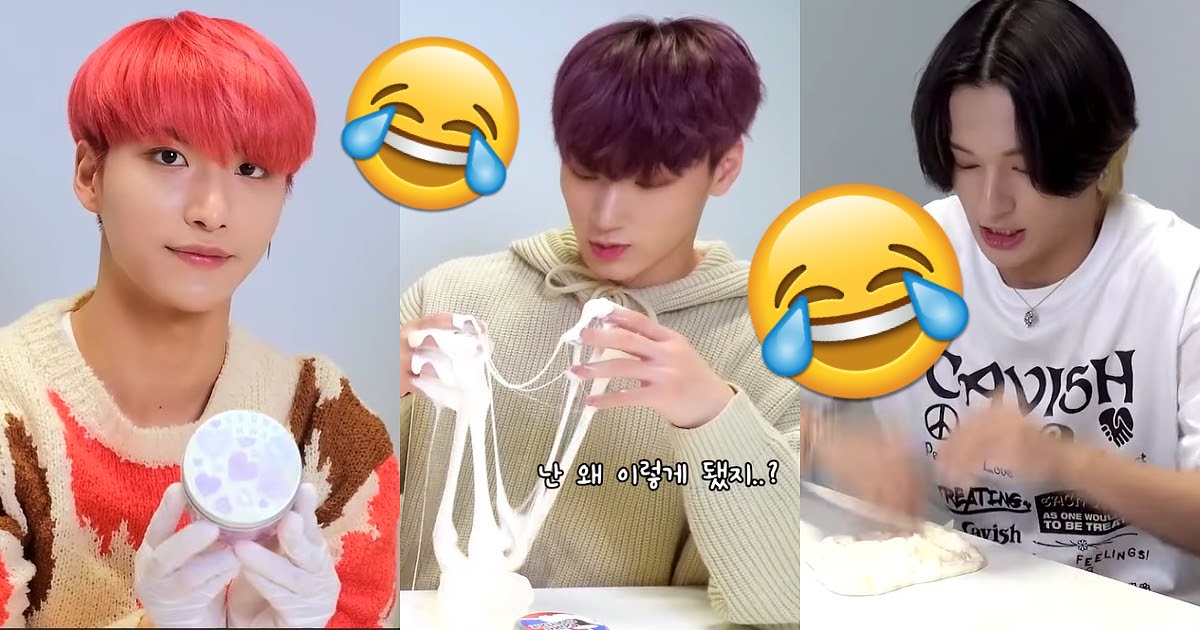 Yesterday on ATEEZ‘s YouTube channel, a video was posted of members Seonghwa, San, and Wooyoung taking part in with slime, in addition to them attempting to make their very own!

The boys got six completely different slimes by slime maker Yang Dding, and their first problem was to determine who obtained to play with which slimes.

They ended up needing to do rock paper scissors for the slime all of them wished: The melon daerong one.

Seonghwa ended up profitable, and likewise selected a cocoa-scented slime, whereas Wooyoung ended up with apple mango sorbet and a pizza-like slime, and San obtained to play with a Yakult and bread-inspired slime and one scented like coke sorbet.

They have been all instantly amazed by the reasonable scents.

San, being the lovable child that he’s, was probably the most audibly excited over the slime, although the one he was taking part in with ended up getting a bit sticky!

Wooyoung obtained a bit… Aggressive together with his slime.

And Seonghwa and San collectively wrote “ATINY” with theirs!

Next, the members used clear slime despatched by Yang Dding and made their very own distinctive varieties with the supplies they got.

San was assured in his expertise, however Wooyoung didn’t share his confidence.

They every had one thing that had impressed them for his or her creations, and the outcomes have been so fairly!

Finally, that they had the problem of creating slime utterly from scratch. They began out rigorously measuring at first, however Wooyoung ended up developing with a “genius” plan for Seonghwa’s.

San’s and Wooyoung’s turned out fairly effectively, however Seonghwa’s wasn’t fairly proper, in order that they ended up calling Yang Dding herself for assist!

With her suggestion of somewhat extra activator, his turned out simply wonderful!

In the top, the fellows had a enjoyable time taking part in with and making the slimes.

Watch the complete video of the fellows taking part in with slime under!